Twenty years ago, in the wake of the September 11 attacks, New Yorkers from all walks of life felt compelled to overcome their sense of powerlessness by volunteering to help out in the recovery effort. They brought in supplies, set up relief stations, and for ten months fed and cared for the recovery workers. Many deep and unexpected — even unlikely — relationships developed out of this.

Using cinéma vérité footage, interviews and archival photographs, we follow several characters through a series of events reuniting them with each other after the closing of the site. Through their stories we present a portrait of the city within a city that was Ground Zero, and examine how an extremely diverse group of people transcended politics and culture in an effort to heal their city and themselves.

9/12: From Chaos to Community — a 60-minute character-driven documentary — is a vibrant, moving, sometimes funny, sometimes painful portrayal of hope and healing in the wake of disaster.

In November of 2001 I began volunteering at Ground Zero after months of effort to get to the site. Like so many people, I felt that only by contributing to the recovery effort could I somehow overcome my sense of helplessness. What I expected was a grim, dark and hopeless place. What I found instead was a city within a city where people worked, slept, ate, cried — even laughed — and above all gave each other support and comfort. Its inhabitants were people from all walks of life, and all political and cultural persuasions who had come together with a common purpose. Relationships formed quickly and deeply and permanently — similarly, I suppose, to those of people in war, where the fragility of life and the value of friendship are never more acutely apparent.

It was a unique place with an extraordinary feeling of solidarity and human kindness and an intensity of purpose and experience that I couldn't quite describe to my friends and family who had not been there. Everyone down there said the same thing: "You can't describe it. No one would understand."

This is my attempt — through the recollections and experiences of those who lived and breathed it — to share it, to describe it, and to any extent possible, make it understood.

SUSANNA STYRON is a screenwriter, director and documentary filmmaker. Her debut feature was Columbia Pictures' Shadrach starring Harvey Keitel and Andie MacDowell. Susanna has written numerous TV movies, written and directed for Sidney Lumet's 100 Centre Street, and written for Tom Fontana's Borgia. She directed the web series All Downhill From Here, starring Brooke Adams; and wrote and directed the narrative short, House of Teeth. Her award-winning feature documentary, Out of My Head, was also a collaboration with Jacki Ochs. She teaches Writing for Television at Princeton University.

STEPHANIE ZESSOS volunteered at Ground Zero for several months. Her 9/11 work included helping downtown residents and workers receive financial assistance from the Red Cross, Salvation Army and the United Way September 11th Fund. After the official end of the recovery effort at Ground Zero in May 2002, she produced Brothers Lost: Stories of 9/11, a feature length documentary about men who lost their brothers on September 11th, which premiered on HBO/Cinemax Reel Life on September 11th, 2006. Stephanie went on to work at FDNY Headquarters. She is now an Emergency Management Specialist with FEMA. 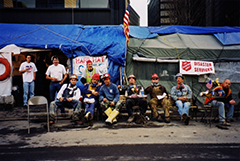 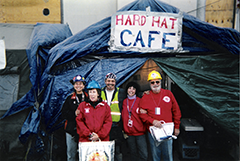 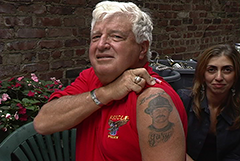 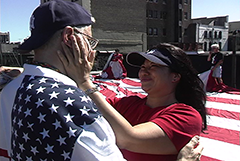